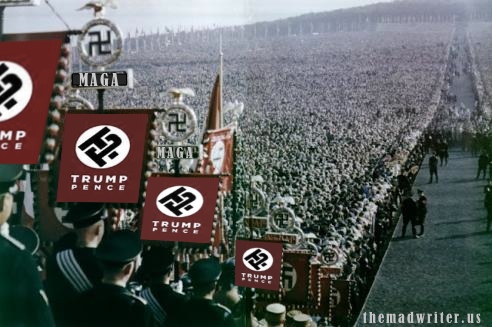 1835
Wrong. Fake news. We’re a free country. No slavery. No slavery here. Never had slavery. Even if we had slavery, it wouldn’t be slavery. You listen only to Negroes. They don’t like me. Before I took office they were saying terrible things about me, me and my family. They want to make me look bad. This slavery thing is a hoax. They know it. Abolitionists know it. All a hoax. Remember the “I killed all the Indians” hoax? Not true. Indians had bad diseases. They died. Lots of them. This slavery thing. It’s a jobs program. I promised everyone jobs. How many presidents do what they promise? That’s what it is, but you won’t report that. Did you know slavery has been around for thousands of years? I bet you didn’t know that. Look it up. It’s in the bible.

1918
No, Mr. President. You can’t do that. All these experts saying don’t, it’s not a good idea, Mr. President. I love my country. I’m doing it anyway. I love my great American people. I’m going to protect them. I’m doing what no one has done, no one. I said, no Spaniards allowed. I stopped it. At the border. That’s how it’s getting in. They’re bringing disease. Crime. Did you know that a Spanish invented the windmill? Not many people know that. He’s very famous, famous in that country. Quixote. Great, great man. This flu, that’s what I would call it. I don’t think its a pandemic. I would know. I understand pandemics. I’ve got a natural ability. Doctors are amazed how quickly I pick it up. My brain figures it out in a snap. I don’t even know how I do it sometimes.

October 1929
I have a fabulous life. Always winning. One day I’ll create a school. You use your mind. It’s easy to make money. I will show people how easy it is. I have a natural ability for numbers. I know markets. Up and down. Goes up. Then down. That’s what it does. Just wait. It will go up. Always does. Up, then down, then up, then down. Did you know the market is controlled by an invisible hand? Invisible. Can’t see it. That’s what invisible means. Isn’t that incredible? Not many people know that. Doctors are amazed when I tell them I can see it. I tell them it’s a big hand. A big beautiful hand. No, I’m not worried. Spend money. You don’t want that. Better money is coming. Bigger money. Listen to me. I’m a business man. I know winning.

December 8, 1941
I spoke with Hirohito. It was an error. Pilots. They were doing practice. Airplanes are complicated. Wings. Propellers. Lift. Drag. Engineers can’t believe I understand it. I have a natural ability for this stuff. I’m like a Wright brother. Maybe I should have been an airplane engineer. But nobody, nobody worry. We’ve got it under control. I know the truth. He promised. Won’t happen again. Maybe in the Spring he’ll visit me. I’ll show him the White House. We have Japanese trees all around here. Did you know that Japanese use wood sticks to eat food? A lot of people don’t know that. When he comes, I’ll show him how we do it. Knives. Forks. His people admire him. He’s a very powerful man.

1943
Why don’t you investigate instead of reporting fake news? You’re from the Saturday Evening Post. You used to be at Columbia Broadcasting. Right? Maybe they fired you for spreading lies, that’s why you work for a different company. You should report the truth. There’s no killing. It’s a hoax by the lying media. You know it. I know it. He’s done great things for his country. Unemployment way down. It’s unbelievable. Everyone loves him. Even small children. You have to see, I saw parades. Huge crowds, thousands. Lots of people. Little kids give the salute. Wherever he goes, they wave flags and salute. Some people say we need a special salute. I haven’t decided. We’re not Germans. We need our own special salute. Did you know he has an underground bunker? Not many people know that. I asked him if any of these things are true. They’d never kill anyone, only if they need to. I believe him. All those people, they are being relocated. No one likes them. He wants to help. He’s moving them to a place. It’s only for them. No one will bother them. Then they can do their Jewish thing.